My name is Karen Giacopuzzi and I live in Silver Spring, MD near Blair High School. I have a long history with computers and software, mainly through building my own PCs and working in the software field doing Process Development, Quality Assurance and Usability. I’ve also done database programming and have studied a number of computer languages including Visual Basic, C++, COBOL, HTML/CSS/Javascript and C#.

I’ve taught basic computer skills to adults through a local community center and for the past 3 years have taught WordPress and other web skills in an after school program on behalf of Passion For Learning, a local non-profit. In the Summer of 2013 I taught a Web Skills day camp at Montgomery College and in 2014 started Gadget Lab here in Silver Spring.

I grew up in Los Angeles and  have a BA in Liberal Arts from University of California, Santa Barbara and a Masters in International Affairs from George Washington University.  I love to write and worked as a journalist before making a career change to software. Gadget Lab is the logical result of my passion for writing, gadgets, software and teaching.

GadgetLab now offers workshop for students from age eight to adults.  The world of electricity and gadgets is fascinating and we’re never too old to have fun or too young to learn. 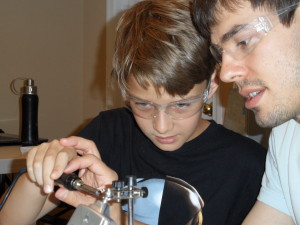 Rustom Meyer is an engineer, an entrepreneur, an educator, a craftsperson, an inventor, and a relentless optimizer. He graduated from Cornell University with a Bachelor of Science Cum Laude, and a Masters of Engineering in Biological and Environmental Engineering (also from Cornell). He holds a Professional Engineer’s license in Environmental Engineering.  For his whole life, Rustom has had a deep and abiding need to work with his hands, a need he has satisfied over the years by making toys, ceramics, jewelry, lamps, solar power systems, and flashlights (among other things). His ‘hands-on’ skills include soldering, welding, laser cutting, 3D printing, circuit diagnostics, screen printing, bicycle maintenance, powder coating, construction, plumbing, and wild plant identification/foraging.

He taught craft and technology to students of all ages at Techshop DC-Arlington for nearly four years. Additionally he has taught the same subjects to a younger audience at many summer camps, Maker Faires, and after school programs. 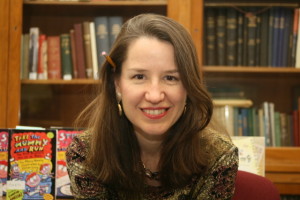 Mary Amato is a local award-winning author, singer-songwriter, poet, playwright, and theater artist. Her chapter books and novels for children and young adults have been optioned for television and the Scholastic Book Clubs and Fairs and have been translated into numerous foreign languages. Her songs have been featured on MPT, WAMU, and in many of her books. She is also a cut-paper puppeteer and the co-founder of Firefly Shadow Theater, now based in MA. 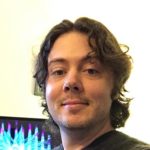 Jason Mullinax is the owner and creator of  Music Discovery Lab.  He’s also a songwriter, percussionist, videographer and educator with nearly 30 years of drumming and performance experience. He has performed widely in the D.C. metro area, written soundtracks for documentaries and films, and produced/recorded original material on his own record label. He is currently the drum instructor at the Richardson School of Music and facilitates music workshops at various locations around the region. 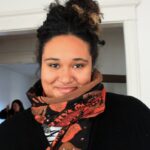 Claire Kalala (CMK) is a multidisciplinary fine artist living and working in the DMV. She is pursuing a masters degree in Art Therapy at the George Washington University in D.C. Kalala’s work/art/collab/studies reflect an experience living ‘in-between’ moments of cultural , racial, and ethnic intersection. Her own mixed heritage and community driven research and artistic activism drive the personal narratives she portrays in performance and portraiture. These voices are the contributors to her own experiential ancestry. 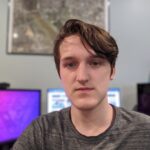 Noah Elazar is a junior in the Math, Science, and Computer Science Magnet Program at Montgomery Blair High School. He started attending Gadget Lab workshops in 5th grade, and started helping out with camps and workshops in 8th grade. He taught himself Python and HTML, and has studied Java in school. He also enjoys working with his hands, and has built computers, and electronics and woodworking projects. Other than tech, he loves playing and watching soccer, and playing guitar.