Gadget Lab operates under the premise that the world is a giant laboratory of joy and learning. While we sometimes use 3D printers and computers, our main goal is to find the magic in ordinary things, then tear them apart and see how they work. 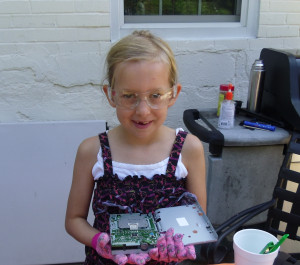 We go in as deeply as we safely can to explore objects that we use everyday but often take for granted.  So how does that battery make electricity?  And why does your ceiling fan spin?  We answer questions like this in the Gadget Lab Academy workshops for kids, and in the Bread and Circuits series for adults.

While the core workshops are found in the Gadget Lab Academy and Gadget Lab Prep programs, we offer additional programming in sewn circuits, ukulele and amplifier making and more.  We keep expanding what we do because we can’t help ourselves.  The world is an even more glorious place when you take a deeper look inside.

Gadget Lab Academy Ages 9 and Up

Gadget Lab Academy offers three core workshop series that are not your typical robotics program. These workshops examine how every day objects work from the inside out. You learn how a battery creates electricity before you use one.  You learn why a motor spins before you work with motors. You get the idea. The three core programs together are like a mini degree program  – without the homework.  In GadgetHeads we focus on the physical world  of circuits and their components.  In CodeHeads we learn about computer code and use it to make physical circuits come to life. In EngineHeads we learn about engines, gears, crankshafts and basic mechanical principles. A more detailed description of each program is below.  For younger kids, we offer  Gadget Lab Prep  which offers carefully selected projects that involve the same concepts as those in explored in the Gadget Lab Academy but in a simpler format.

Click the links below for descriptions of our Gadget Lab Academy programs: 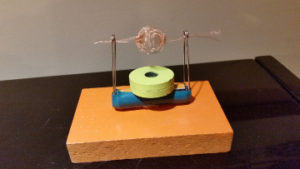 The Gadget Heads program offers hands learning through fun projects that build on each other in a focused and purposeful series of workshops. The theme is “Robots the Inside Story” which demonstrates the three main components that drive robots and most of the gadgets we use every day – batteries, motors and circuit boards.

We start with batteries – before you use one you build one so you’ll know how batteries make electricity (hint: Chemistry).

We move on to electric and permanent magnets so you’ll know why a motor spins. Then we’ll make a little spinny motor and other projects will small DC motors.  You’ll get to play around with all kinds of motor in Gadget Lab’s unique Museum of Small Motors.

Now that you’ve got the batteries and motors down, we move on to circuits. You’ll like to splice wires using a soldering iron and heat gun to make fun circuits like  3D  printed doorbells that you design and make yourself.

We’ll take computers and appliances apart, assemble and solder a 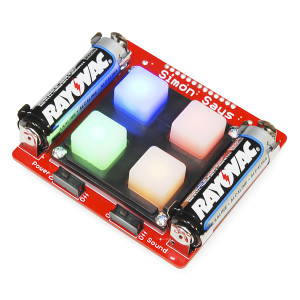 super cool flashlight and you’ll solder an assemble a real Simon game.    Outside of 3D design there is very little screen time in Gadget Lab. It’s all about learning and making. The grand finale is a simon game that you’ll assemble and solder.

In Codeheads you’ll learn many of the same programming skills that you’d get in an introductory high school or college programming class. But instead of making things happen on a flat screen you’ll learn to control LEDS that change to custom colors your design.  You’ll make buzzers create music ,  and will write code for motors and other cool physical world components.  While there is screen time in this workshop, you’ll be out of your chair soldering and splicing components that you’ll control with code that you type in yourself.  This coding class is the real deal and will give you a firm head start on any high school or college coding course you take. 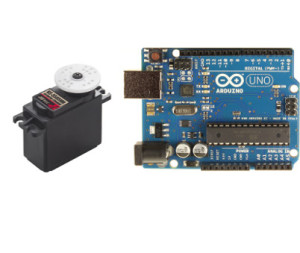 We use small Arduino microcontrollers that you’ll take home to make your own cool stuff. Kids under 10 should start with CodeHeads Prep unless they have prior coding experience.

EngineHeads covers engineering,  engines and mechanical principles – the “E” in STEM that is too often neglected. 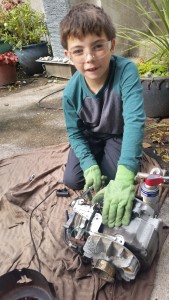 You’ll take apart small gas powered engines to learn the difference between two and four stroke engines. You’ll also learn about internal vs external combustion engines with Gadget Lab’s super cool working model engines.  After engines we move on to gears and levers which help engines do their work.

Projects include a small 3D printed piston/cylinder  model and an awesome hand cranked, cam driven automaton.   This is a hands on workshop. Screen time is limited to watching engine gifs online (because they’re awesome).

Now that you’ve learned to build circuits,  take things apart and control stuff with code, we’ll put it all together to make hacked toy/ animatronic animals.  We’ll use sound modules from old toys, distort the sound and add a pickup so your animal will sound as cool as it looks. You’ll give a second life to motors and other stuff you find in toys and old appliances as you put it all together in an noisy, original work of kinetic art.  This workshop is only available to students who have taken GadgetHeads and CodeHeads or CodeHeads Prep. 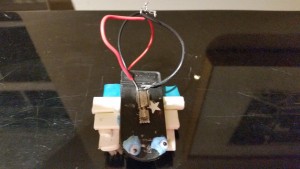 This fun hands on workshop covers all the topics from the regular  Gadget Heads program but in a simpler format. Learn about electricity, circuits magnetism and mechanics  by making a  rigged out cigar box house for your tiny “Power Pet”.  Make a floating magnet sculpture, sew a light-up “Power Bracelet” and more. CodeHeads Prep Use  drag and drop

programming using Scratch, Hummingbird Robotics and Finch robot to teach programming logic. Make programs and games that trigger outputs in the physical world using sensors, motors, LEDS, buzzers and more.  The last lessons will use a pre-programmed board to see the actual code behind the drag and drop interface – because this is Gadget Lab where we dig down to see what’s happening underneath, even with code! 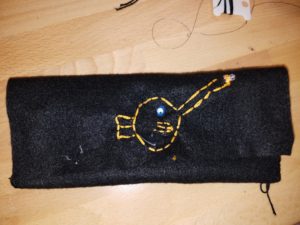 thread and sew on LED to make a super cool light up pencil case. Workshops to make more complex sewn circuits that are controlled by a small Arduino micro-controller are in the works.
Circuit Circus 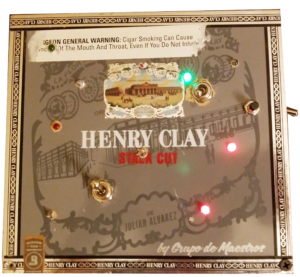 Circuit Circus is a great compliment to GadgetHeads.  In this really cool workshop, you’ll delve deeper into the mechanical switches that we use in both manual and coded circuits. You’ll use switches, push buttons, LEDs and a motion sensor to make a super cool switch box that employs all kinds of circuits.  You’ll learn how each of these components work and will solder and mount them into a beautiful recycled cigar box.   The circuits work like a puzzle. You’ll need to turn them on in the right combination to turn on all the lights.
Ukulele MakingIn this workshop you’ll 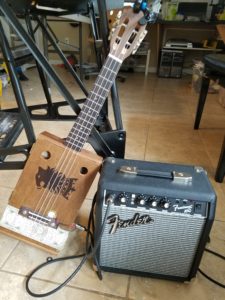 make a beautiful, working ukulele out of a recycled cigar box. You’ll learn how to safely use a saw, a power drill and clamps. You’ll also learn about stringed instrument construction and how to adjust the intonation.  And of course, you’ll get an introduction on how to play your gorgeous new uke! 2D Design in Vinyl

Learn the basics of 2 dimensional, vector based graphic design to design stickers, fold-up shapes (machine-cut oragami-like creations), logos, t-shirt designs and more. Then bring your creations into the real world using a CNC (computer numerical control) vinyl cutter. Anticipated take-home items include a vinyl sticker in the shape of the student’s name, a fold-up nightlight/small lamp, a personal logo sticker designed by the student, and a t-shirt with the student’s personal logo design on it.

We’ll make ridiculously fun robots that are both self driving and remote controlled. We’ll use recycled: toys, amazon boxes, TV remotes, small audio devices and anything else can find to make a unique take home robot that is as fun to play with as it is to make.